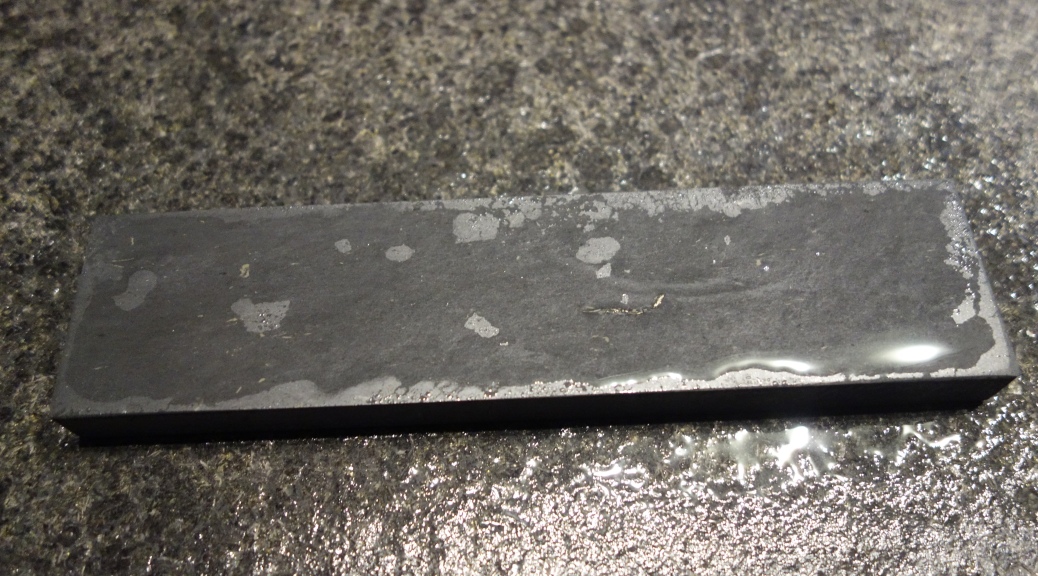 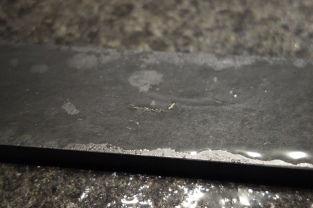 About this specific Stone:
The Müller’s Water Grindstones have a specific mottled pattern on the surface. Color is more dark-grey with pyrite inclusions, sometimes they also appear surrounded by Quartz. Another indicator might be darker nearly black inclusions appearing like small clouds. Slurry color tends to be dark-grey with a hint into brown.

Honing/Touch Up with the Müller’s Water Grindstone:
I mostly use this stone within the pre-finish area in my progressions. I rated this stone between 6K-9K because working with slurry created a lower grit, finishing with plain water reaches depending on the stone probably 8K-9K.

personal shaving results (PSR):
I do not prefer to use this stone as a finisher, because the shave doesn’t fell comfortable enough for my personal standards. Using pastes, chromium oxide or diamond spray might be a way to come around well shaving from this stone.

Evaluation:
However economically the stone is a good one, it isn’t expensive, its still available and as mentioned usable with them mentioned methods above.  These types of stones are quarried somewhere in Germany, actually these are for sure no Thuringian Stones which is sometimes mentioned to be such a type of stone.

Comparison with other Stones:
I added two shots of a comprabale stone i got from Marc as a present. It seems to be the same material, it shows an identical coloration, same slurry color, the same pyrite inclusions and the same black colored clouded inclusions. It also behaves the same way as the Müller’s does.

This site uses Akismet to reduce spam. Learn how your comment data is processed.