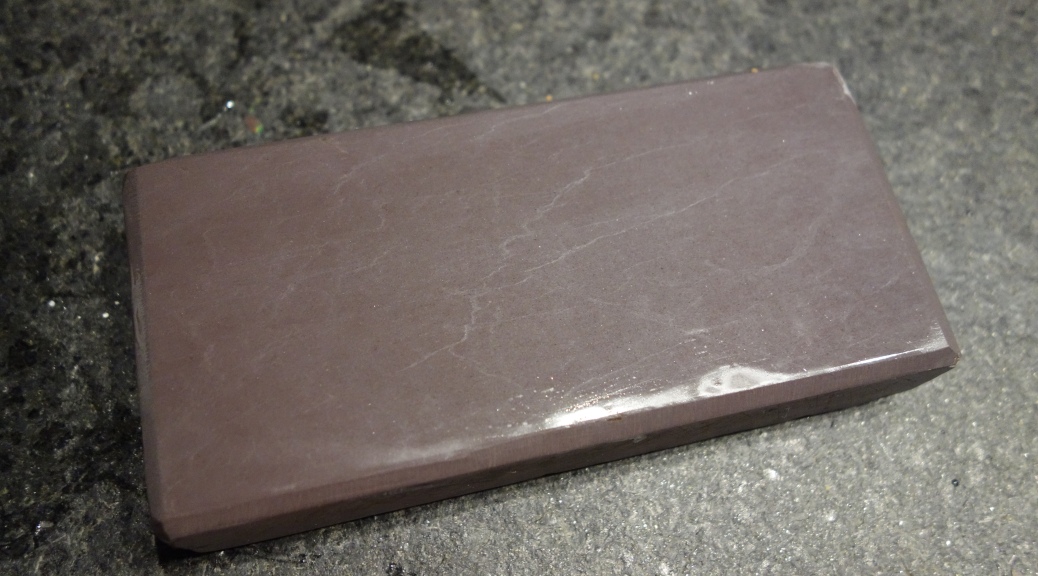 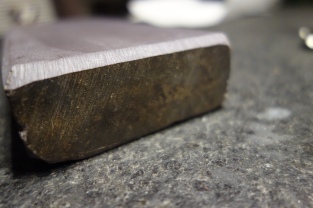 About this specific stone:
That’s the heaviest “LA LUNE” stone i ever had in my hands! It actually weights over 1000gr. and has a very nice working size. Well visible are the saw marks which appear different on both sides of the shorter cut. The saw marks are the same saw marks appearing on some of the “SPECIAL STONES ONLY FOR GOOD RAZORS”, but it seems to be that there have been different types of cutting equipment during the companies period. Sometimes appearing more circular and finer, on this example less circular and wider.

Honing with the Pierre Aiguiser La Lune:
This stone is a ultra fine finishing stone! It seems that the best results can be reached when a water/glycerine mixture is used on the stone. These stones cut very fast for their high fineness. The stones can be well used after the 8k or 10k stone and for sure, also before, due their fast cutting nature. The last 50 laps should be done with a water/glycerine mixture without any pressure. After stropping the edge can get seriously sharp, a good to very good HHT 4-5 is possible. The stones leave a very well polished bevel, depending what medium is used on the stone and how much pressure is used the scratch pattern looks a bit coarser or more refined.

personal shaving results (PSR):
The shaving results with the “La Lune” Stones are excellent, they are definitely in my personal TOP3 of the actual razor hones i own.  They give a very nice clean shave still owning a certain smoothness. I would rank them a bit under good thuringian stones concerning the smoothness but more sharp. So its just a matter of a personal preference what stone to choose.

Evaluation:
These stones are very nice razor hones and its great that they have been especially sold as a Razor Hone. Its not really easy to come over these types of stones today, especially when they are labelled. Quite often they appear without labels  and sometimes only a bit of luck is needed.

History and General Information:
The information written here is in general about the “French Special Stones”. Named here “Pierre aiguiser La Lune” or the “Special Stone only for Good Razors”. Both types of stones have been sold from F.G.B.C. and the “Special Stone for Good razors” was also exclusively sold from Manufrance (MF) as beeing a well known french catalogue company in the past. The company was established in Villebouef, Saint Etienne, on the 10th November 1885.

Up to date the origin of the stones and in detail the places where the stones might have been quarried is not known. Actually there are some traces leading towards the french region down the Vosges (Steige) where a red schist type has its origin called Schist de Steige or “Lie de Vin Rouge”, its has some good properties which might help the stone to be usable as a sharpening stone (SiO2 59,3%, Al2O3 22%, FE2O3 7,3%). Other places could be well some of the Quarries (Merviller-Vacqueville, Pexonne, Badonviller) named in the letterheads or advertisement of F.G.B.C..

Up to May 2014 the Company with the shortcut “F.G.B.C.” selling the “LA LUNE” Stones was unknown, until a member named “FERDI”  of the french wetshaving forum Coupechouxclub found an old pricetable from “F.G.B.C.” from 1974.

“F.G.B.C.” stands for the company “F. Ghelfi Birolleau & Cie.”  selling sharpening stones and building up Grinding stones. They sold different kinds of stones like “Pierre Du Levant”, “Pierre Arkansas” and Grinding Hones like “Grés Blanc, Gris & Rouge”. They had men made stones like the “New Master Stone” in their catalogue which is a SIC (Siliciumcarbide) Stone or a “Brocken Selected La Lune Extra Fin” which seems to be a double sided sharpening stone.

The newer company name “F. Ghelfi Birolleau & Cie” was also down the 47 Rue de Saintonge, Paris (1974), so it seems that the company stayed there from 1925-1974 concerning the documents. The years in brackets are taken out of existent documents like invoices or letters.

On some of the older Lorraine stones there is also a shortcut given named “M.P.O.P.” which was an addition to the letterhead of the  predecessors company or probably a parallel running company from “D. Giovannici, L. & B. Ghelfi”. M.P.O.P. stands for “Meules, Pierres, Outillage, Produits”.

My Videos from the Razorlovestones project: 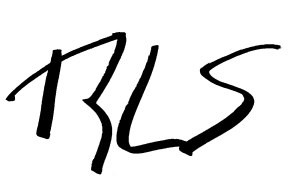